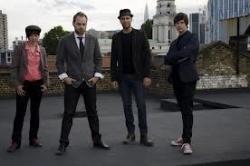 Breaking Magic is a new television series aired on the Discovery Channel USA and Discovery Channel International.  The tv show sees a group of international magicians perform a variety of tricks and illusions in front of a live audience.  The unique aspect of the show is that once the trick has been performed, the show explains the science behind the magic, revealing the details of each awe-inspiring illusion.

The first step for UK Bungee was to test the theory and after a few failed tests, the technique was improved and the theory finally proven.  With the trick confirmed as possible, the next step was to produce the relevant risk assessments and method statements as well as ensure the jumper was fully insured.  Once complete the venue was confirmed as Battersea Power Station and the date was set.

The day of filming went smoothly, from the filmed demonstration of what would happen if the book failed to hold to the jump itself.  The quick work of our on-site team ensured that the two books were intertwined quickly and effectively in front of the live crowd and the final checks from the Jumpmaster ensured the safety of the jump.

The jump itself was a complete success with the intertwined books holding the rope together and the stunt enjoyed by a stunned live crowd.