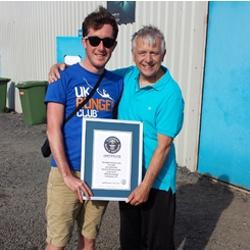 Ray contacted UK Bungee earlier in the year stating his intentions to break the Guinness World Record and after a few discussions with our Managing Director, Jon Snape, Ray booked himself in for a one hour slot at the annual 400ft Bungee Jump, committing to the full cost himself.  With the previous record set in November 2006 in China at a height of 164ft, Ray was going to beat the world record by more than double the previous height!

With Ray’s adventure experiences including climbing Mount Kilamanjaro, driving a group of huskies across the Arctic for a distance of 250km and trekking through Death Valley, Ray was no stranger to risk and set about drumming up as much support as possible from both local communities and various news programmes.  The aim of the jump for taxi driver Ray, was to raise money for the Taxi Driver’s Charity Fund which supports sick and disabled children with day trips and charity events, a cause which Ray works year round for through hosting talks on his experiences in local schools and nursing homes.

On the day of the jump itself Ray arrived, as did the crews from the newspapers and tv shows that he had persuaded to feature his story.  During Ray’s one hour slot he had to perform three 400ft Bungee Jumps before he was able to break the world record, and when he finally did submerge in the water below it was with a huge force!  With a Guinness World Record adjudicator on site, Ray’s achievement was verified as a world record much to the pleasure of the UK Bungee crew and Ray himself!  Due to the force at which Ray hit the water Ray did have to take a trip in an ambulance once he was presented with his award, which helps to show the level of commitment and risk that Ray took to complete the charity challenge; but don’t worry Ray called us a couple of days later to confirm that he was fine and thoroughly enjoyed his bungee jump!

The 400ft Bungee Jump at the National Diving Activity Centre in Chepstow is the UK’s highest bungee jump.   Usually taking place once a year, this year there is an additional event taking place on the 12th & 13th October as unfortunately severe weather meant that one of the event days had to be cancelled half way through during the August event; which is good news for those who missed out last time!  The 400ft Bungee Jump is priced at £125.  To find out more information click here.

Please note that Ray’s bungee jump was an exception to our standard operating procedures and bungee jumpers do not regularly bungee jump into the water at this or any other event.