Dorset to Dubai with the UK Bungee Club! 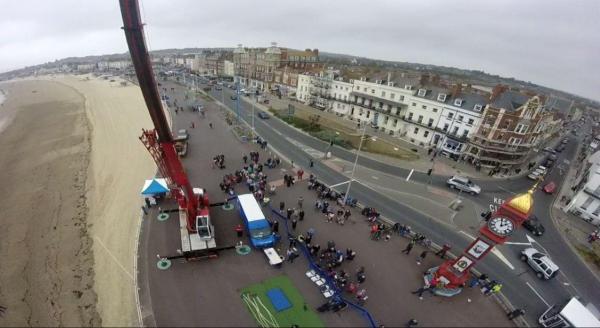 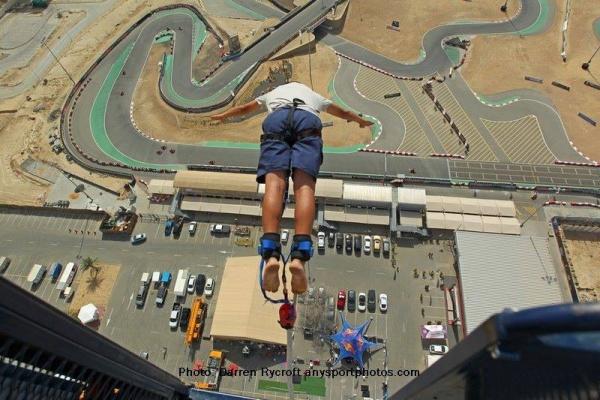 The UK Bungee Club travelled to the Weymouth Kite Festival last weekend to bring Bungee Jumping to the picturesque Weymouth Esplanade.  Jumpers were treated to a beautiful sea view as they took the plunge from 160ft over the popular sea side resort, despite windy conditions more suited to kite flying than Bungee Jumping.

The Weymouth Kite Festival has been a popular annual event since it’s inauguration 22 years ago, providing 3 days of beach front entertainment to locals and visitors alike.  2 years ago, due to the withdrawal of funding by the local council, the Community Kite Group now organise the event and use the festivities to raise money for local charities.

UKBC’s visit to Weymouth had originally been scheduled to take place in summer last year, but problems with the site chosen to place the crane led to a postponement.  This delay looked set to continue on Saturday as rain fell and wind speeds began to rise higher; lowering hopes amongst the brave people who had signed up and raised funds for local charities.  However, this delay turned out to be short lived and after a couple of hours the wind subsided enough for the determined crew to begin the operation leaving the organisers ‘over the moon’.

Dozens of brave souls took to the air over the course of the day, whilst kite flyers practiced on the beach ready for the competitions to be held on Sunday.

Meanwhile, almost 5000 miles away, another UK Bungee Club Jumpmaster took part in the first ever commercial 300ft Bungee operation in Dubai with our partners at Gravity Zone. 67 adrenalin seekers braved temperatures of up to 40 degrees for a chance to take part in the highest public Bungee Jumping event held in the emirates.

This all goes to show, come wind and rain or baking heat our intrepid crew are always ready for a new adventure!