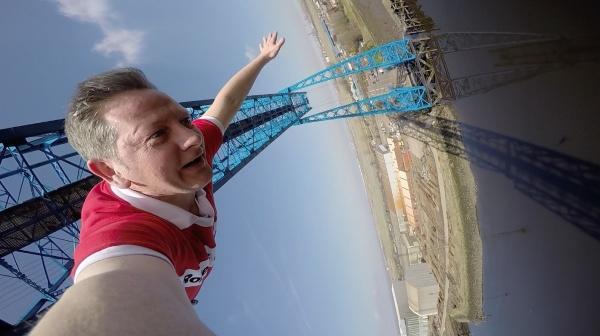 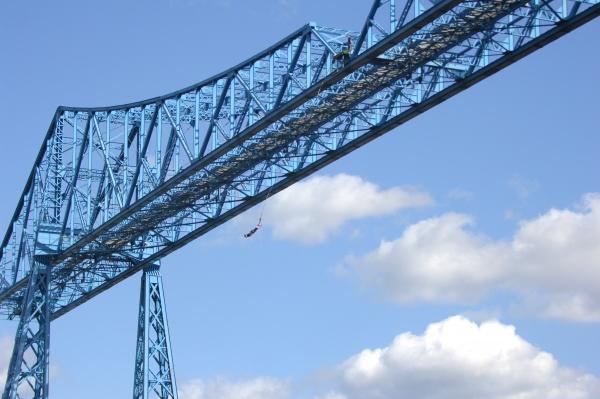 A century on from a Middlesbrough labourer’s ‘act of bravado’ at the Transporter Bridge, the UK Bungee Club helped a Mayoral candidate survive the leap which led to his ancestor’s death. With the addition of a bungee cord of course!

Dave Roberts, who is in the running to become the Mayor of Middlesbrough, grew up with stories of his great-great Uncle Daniel McAllister who, just over 100 years ago, leapt from the Transporter Bridge and died.

50 year old Dave Roberts was able to track down his forebear’s death certificate which lists the unfortunate labourer’s cause of death as ‘Shock and suffocation from drowning through jumping from the Transporter Bridge in a spirit of bravado whilst under the influence of drink.’

Mr McAllister leapt from the bridge after a friend in a local pub challenged him to take the leap for only sixpence.  He died, aged 30, on May the 4th 1913.

50 year old Dave Roberts decided to recreate Daniel’s fatal feat to raise money for a children’s charity, the MFC foundation, and asked local residents to pitch in £2.50 each, approximately what sixpence would be worth today.  UK Bungee Club’s events team were more than happy to help the potential Mayor in his preparations and the instructors on site helped to film the former TV and radio presenter’s stunt and to launch himself into the air over the Tees in safer circumstances than the late Mr McAllister!  Mr Roberts enjoyed his bungee jump and, in an echo of his great-great Uncle's bravado, even managed to say a few words to Daniel as he jumped.

Think that you could take on the Bridge Jump? CLICK HERE to book your place!