UK Bungee at the Holi Festival of Colours in Dubai 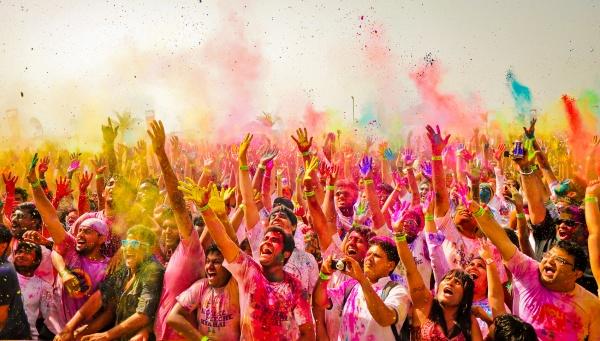 Our Jumpmasters recently jet off once again as the UK Bungee Club continues to support our partners at Gravity Zone Bungee Dubai.  Our instructors are making regular trips over to the UAE for sand, sunshine and Bungee Jumping somewhere a little more exotic than usual and events don’t come much more exotic than the Holi Festival of Colours!

The Holi Festival of Colours is a Hindu festival celebrating the end of winter and the arrival of spring.  It’s a day of fun and frolics where people chase and cover each other with brightly coloured powder paints or water balloons filled with coloured water until party crowds resemble rainbows.  The United Arab Emirates may sound like an unlikely place to celebrate a traditionally Indian Hindu religious event, but Indians make up around half of the total population of Dubai and, wherever large communities can be found in the world, Holi parties will be found!

There aren’t many things which attract attention quite as effectively as a Bungee Jump and the team behind this years’ Dubai Holi Festival invited Gravity Zone to provide an extra special attraction for their proceedings.  With over 5000 people expected to attend and some hugely popular DJs billed to perform, this was a great opportunity for our team to show what it could do.  As the crowds arrived the colours flew and the Bungee team were soon looking the part as handfuls of paint and dye-filled water guns unleashed a bright barrage over the party-goers.  As the first jumpers leapt from the cage, the crowds started to gather.

The event was a massive success; the singing, dancing and paint hurling went on long into the night and Gravity Zone and UK Bungee completed the event with well over 100 brave and brightly painted customers taking a leap of faith they will never forget.  The Holi festival is a celebration of life and not a lot of things make you feel more alive than a bungee jump!