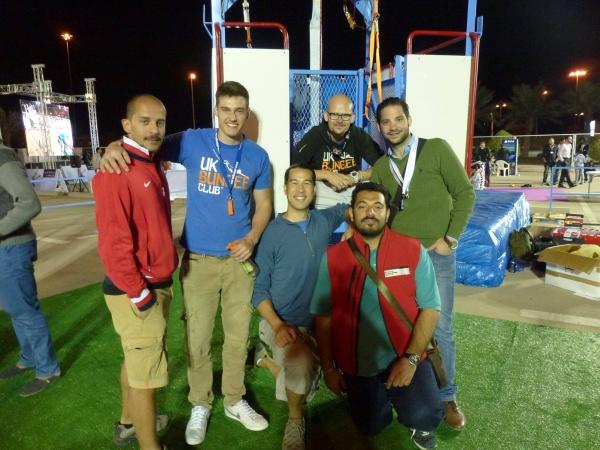 Freezing Sheffield is a world away from the blazing sunshine and high temperatures found in the deserts of Saudi Arabia but that is where a team of UK Bungee Crew recently found themselves.

There was much activity in Big Bang Promotions HQ when the call came through that our partners at Gravity Zone Dubai wanted us to operate bungee events, for 3 days at a time in 3 different cities spanning the width of Saudi Arabia beginning as soon as possible!  The Big Bang events team pulled together and, after a flurry of visa applications, shipping arrangements and flight bookings an excited team was quickly dispatched to Heathrow.

Aside from the obvious change in temperature the first thing the team noticed on arrival was how warm and welcoming their hosts were.  Our Site Controller Will recalled, ‘from the airport staff we met first, to our new team on site, to the many customers we worked with throughout the trip; we found happy faces everywhere and made a lot of new friends.’

Though there have apparently been a handful of private bungee jumps in Saudi before this was to be the very first time anybody had held a public event and, as this was a marketing push for STC, a telecoms company with 160 million customers across the Arab states and beyond, it wasn’t too much of a surprise that the events were popular.  Still it was hard for the team not to be taken aback by the size of the response to what they were doing.

The events ran at capacity every day and each participant had their 160ft crane jump filmed and put straight onto YouTube with the person whose video received the most ‘views’ and ‘likes’ going on to win a flight in a jet fighter.  It wasn’t long before there were hordes of potential Bungee jumpers queueing up and hurling themselves out of the jump cage.  The competition and the excitement around Bungee Jumping’s arrival in Saudi made for an amazing atmosphere and after a couple of days, and dozens of viral videos being spread around, the UKBC Team began to notice that they were being recognised in the restaurants and shopping malls of Riyadh, Al Khobar and Jeddah.

No event is without it’s problems and this was never going to be a holiday but our team, their new team mates from STC, Gravity Zone Dubai and the crane operators formed a close unit from the start and tackled every challenge that came along.

The event was a massive success and the crew even managed to fit in a little site seeing.  It was another amazing experience for our team and, though it was hard work at times, everyone here at UK Bungee Club are looking forward to the next opportunity to pack a bag and take bungee jumping to a new, exotic location.

UK Bungee Club would like to extend a huge 'Thank You' to Ramez Shawkey (Gravity Zone), and to all the many new friends from STC and their stalwart Crane Operators Abbas and Said for their hard work and help.

Are you ready for the 160ft Bungee Jump?