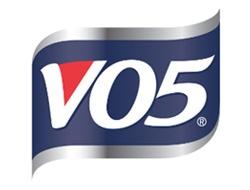 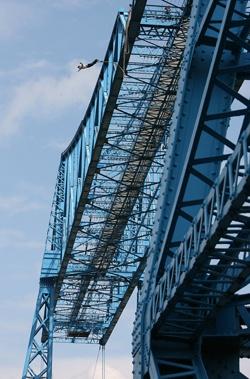 UK Bungee are proud to have worked with VO5 on their new product launch!

This year VO5 has launched their new shampoo and conditioner for men and to help launch the new product, VO5 set about their Extreme Shampooing campaign which saw actor Jim Chapman take to washing his hair in some of the most extreme scenarios – including bungee jumping!

The location for the Extreme Shampooing was set as Middlesbrough Transporter Bridge, standing at 160ft this jump is the UK’s first commercial Bridge Bungee Jump.  With just two hours to film the jump and a breeze at the top of the bridge, our crew had very limited time to get the perfect jump filmed!  The aim of the shoot was for Jim to shampoo his hair at the top of the bridge, leap off the 160ft platform with his hair lathered up and rinse his hair clean in the water of the River Tees below.

Jim was placed in his harness and taken up the 210 steps to the top of this Northern icon all the while filming and presenting for the advert.  Once at the top of the Bridge, the actor took the unusual step of rinsing his hair with a bottle of water and then lathering up with the new VO5 Extreme Shampoo.  Finally, lathered up and ready to jump it was over to our crew to ensure that the final harnessing steps and safety checks were carried out before jumping out over the River Tees.  Unfortunately the bungee jump was a little too extreme for Jim but luckily one of our very own crew members, Dan Baine, was happy to take the lathered up leap!  Due to the changes in the tide of the River Tees below, the first two jumps were unsuccessful in hitting the water, but a little whilst later with just 5 minutes left to get the shot, the tide increased and Dan was able to successfully wash his hair in the River Tees!

To check out the VO5 advert for yourself just click here!