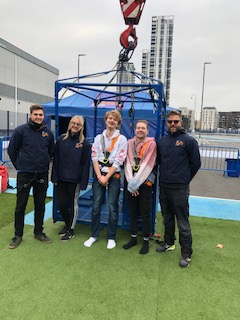 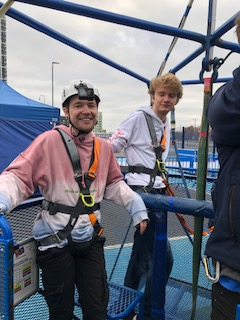 The day is available to watch here.

19th November 2021 we joined TommyInnit and DanTDM at the O2 arena in London for their latest challenge, Bungee Jumping! The day started by abseiling from the cage, with a very scared Tommy going first he entered the cage and started his ascend to the top of the crane. Then with some reassurance he started the abseil back down to the ground to me meet Dan and swap over. Into the crane Dan got, a little skeptical but with much more confidence than Tommy had, without much convincing Dan was out of the crane and rapidly abseiling back towards the ground.

After this, they realized that they still had to participate in the activity they originally came for, the Bungee Jump. So, it was back into the cage for the both of them and up they went ready to Bungee Jump. Dan was the first to Bungee, he was counted down, but he needed a moment before he could do it. The countdown happened again, and Dan jumped straight out, a few screams later and he was satisfied with his jump, although a little shaken from it. Then once again it was back into the cage and up in the crane for Tommy’s jump, he took a bit more convincing for his Bungee but with lots of encouraging words and patience from the jump master it was his time. As soon as Tommy had jumped, he realized that what he was doing was an enjoyable experience, and was joined at the bottom by Dan.

Excitement hit thinking that the day’s activities were over, Tommy and Dan were pleased with themselves for what they had just done until they were surprised with the news that they would be going back up in the cage to participate in a Tandem Bungee Jump, where they would both be jumping at the same time but fastened together. After they had gotten over the initial shock of having to do it again, they were back in the cage and having the count down for their Bungee. After already doing their 160ft bungee alone, they were both much more comfortable during the tandem, with only a few screams between them to start they were then chatting to each other. Both pleased with what they had accomplished with their day, they were happy it was finished and that there weren’t any more surprises.