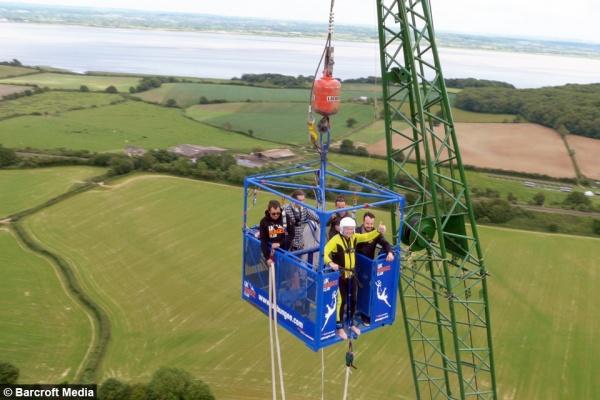 Here at UK Bungee, we’re not ones to shy away from a challenge. So when we were asked to help 73 year old daredevil Ray Woodcock take on a record breaking 500ft water touch to promote EE’s new Action Cam, we couldn’t say no! With weeks of working out the logistics of such an epic jump behind us, we set off for the National Diving and Activity Centre in Chepstow, Monmouthshire for one of our craziest adventures to date.

An extreme jump like this needed an extreme crane and so a 300 tonne Leibherr with a 42 metre extension was bought in at 6am to begin a gruelling 6 hour set-up. Bearing in mind that this took another smaller crane to assemble, this was one big crane!

While a number of test jumps took place, firstly with a bag of weights matching that of our daredevil diver and then with a member of the UK Bungee Team, Ray arrived on site with his partner Heather by his side and was soon in his bright yellow wetsuit shooting interviews with the production team from Barcroft Media, the company appointed by EE to capture the challenge for promotion of their new product. EE’s Action Cam allows the action to be streamed over 4G from the camera to ‘Skeegle’, a new video sharing app where you can invite friends and family to watch. Using this innovative technology, Ray’s family back in Essex were able to watch the action unfold and share the experience.

With Ray harnessed and the Action Cam strapped to him, everyone took their place and the cage was lifted. What followed was a spectacular jump that saw him submerge into the water below all the way up to his knees. Giving the prearranged ‘OK’ hand signal to our ground crew on the ascent of his first bounce, the crane slewed back in towards towards the landing area and two members of the UK Bungee crew ensured that Ray landed back on the ground safely. Awaiting medics were straight by his side to check that he had escaped unscatched. With plenty of nodding and thumbs up, it was clear to see that Ray had loved every minute of the adventure!

Jon Snape, Managing Director of the UK Bungee Club said of the day, ‘Today has been a great success and one that we’ll all remember for a very long time. My team have been working on the logistics of this event for quite a while and to know that we acheived what we set out to and more importantly Ray is thrilled, we couldn’t have asked for a better outcome. His welfare was always our number one priority.’

Ray definitely isn’t a stranger to the UK Bungee Club crew. Back in 2013, we helped him smash the Guiness World Record for the Highest Bungee Jump into Water (400ft)! No stranger to danger, Ray’s other adrenaline fuelled experiences include climbing Mount Kilamanjaro, trekking through Death Valley and taking on the chilling 30,000ft Halo Jump.

Something tells us this isn’t the last we’ve seen of Ray Woodcock and his wild challenges!