Charity Manager on a Bicycle and Pikachu Bungee from Cleddau Bridge! 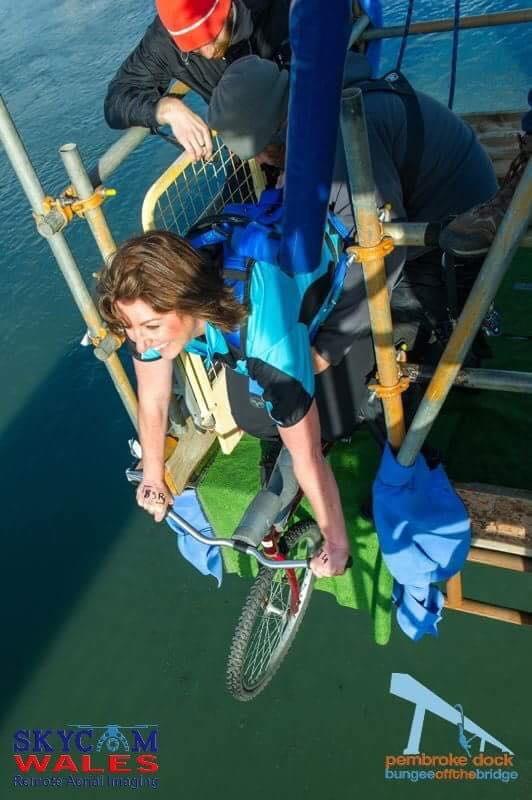 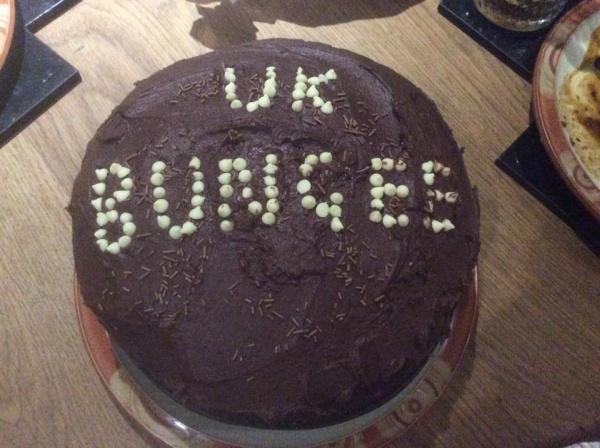 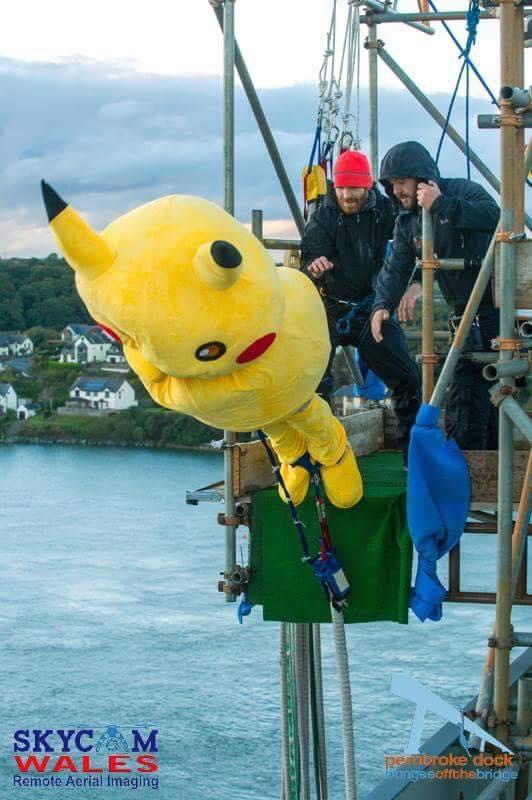 Sandra Dade from Long Eaton dared not only to bungee jump from Cleddau Bridge, Pembrokeshire, Wales, but did so whilst attatched to a bicycle! Once she had mounted the bike at the top, she was attached with a harness and balanced securely over the edge. After being steadied by the team at UK Bungee, Sandra showed little fear with a few nervous giggles, but a big smile on her face as she bravely rode over the edge and glided above the water of the Milford Haven. The video has so far had a mamoth 10,000 views and can be found here.

This was all in a bid to raise £1000 for the charity she manages- The Paul Sartori Foundation, which provides a 'hospice at home' service. This is the only one of its kind in Pembrokeshire and was set up in 1982 in remembrance of the late local priest Paul Sartori, providing a free service of care to those in the later stages of their terminal illness in the surroundings of their own homes.
Sandra has so far through doing the jump raised 90% of her goal fund but is still aiming to reach an amazing £1000 which can be donated on her Just Giving page here.
A 6tf tall GIANT Pikachu also made an appearance on the dock doing a jump of his own! The caused a stir amongst the crowd watching from the bridge who were no doubt Pokemon Go fans. He bravely completed the jump with his arms clenching the in and outside of his head in order to keep in from ending up in the water. This was Mark Peet in disguise, who raised over a whopping £1000 in memory of Natasha Bradbury and her son James.
James Parfitt jumped from the bridge in memory of his friend Clive for Pancreatic Cancer UK. James leaped from the net with confidence and a wild grin, whilst looking the part donning his UK Bungee T-Shirt! With his video reaching almost 12,000 views! A family member of his even made a UK Bungee cake in support! James' JustGiving page is still open to donation here.
Other noble participants included Sarah Jones for The VC Gallery, Sarah Gerlach for Marie Curie, Sarah Jones for the VC Gallery and Brad Mills for Combat Stress.
Do you also fancy a bridge jump? Why not jump 160ft form the Transporter Bridge in Middlesbrough using our 20% off seasonal sale here!
UK Bungee has jumped over 2,500 charity fundraisers and in the past two years have helped raise over one million pounds. Book your charity jump here!
Photos by- SkyCamWales